Background: Prior studies have shown that SneakPeek® Early Gender Test can accurately determine fetal sex as early as 9 weeks gestation using a qPCR-based assay. The purpose of this study was to evaluate the clinical performance of SneakPeek® for noninvasive prenatal testing (NIPT) to determine fetal sex at an earlier time point: 8 weeks gestation.

Results: Male Y-chromosome DNA was detected in all samples from women carrying a male fetus. SneakPeek® correctly identified fetal sex in 107 of 108 pregnancies. Four of the 108 samples initially yielded an inconclusive result. A second sample was collected from the four participants and a result was obtained on the second round of testing. Fetal sex for all samples were unknown prior to genetic testing and confirmed through a sonogram. In this study, SneakPeek® accuracy, sensitivity, and specificity were 99.1%, 100%, and 98.2% for fetal sex identification, respectively.

Conclusion: This study showed that SneakPeek® Early Gender Test is highly accurate for fetal sex determination in pregnancy as early as 8 weeks gestation.

Early sex determination has evolved from invasive techniques such chorionic villus sampling and amniocentesis to noninvasive prenatal testing through the analysis of cell-free fetal DNA (cffDNA).1 The detection of cffDNA in maternal plasma and serum was first described by Dr. Y M Dennis Lo in 1997. The identification of fetal DNA in maternal blood paved the way for subsequent analysis of fetal DNA for non-invasive prenatal diagnosis.2 Since its discovery, several studies have shown detectable amounts of cffDNA in maternal circulation as early as 5 weeks gestation, with testing becoming more reliable after 7 weeks gestation.3

cffDNA represents about 10% of the total cell-free DNA in maternal plasma at 11–13 week’s gestation.4 Multiple studies have demonstrated the use of maternal plasma DNA for fetal sex determination.5 These studies utilized Y-chromosome target sequences, with varying reported results for specificity and sensitivity.6 Studies that utilized a single copy gene (e.g., sex determining -SRY) resulted in high specificity but lower sensitivity for fetal sex, while requiring a large volume of maternal blood (e.g., 10mL).7 On the other hand, studies that utilized a multicopy target sequences on the Y-chromosome (e.g., DYS14) resulted in greater sensitivity but lower specificity while requiring significantly lesser volume (e.g., 100µL) of maternal blood.8

There are several methods for determining fetal sex during pregnancy. Sonography is still one of the most common methods used for determining fetal sex. In general, anatomy scans are not performed until 18 to 20 weeks gestation and not highly accurate prior to 12–13 weeks gestation. Traditional non-invasive prenatal testing (NIPT) can be used to determine fetal sex with high accuracy. However, NIPT tests are not intended to be used prior than 9 to 10 weeks gestation.9 Many pregnant women will present to an obstetrician prior to 9 weeks but will not have an option for learning fetal sex. Previous studies have demonstrated that the SneakPeek® Early Gender Test can determine fetal sex as early as 9 weeks with 99.6% accuracy. In this study, we sought to determine the accuracy of SneakPeek® Early Gender Test when performed as early as 8 weeks gestation.

One hundred and eight participants from five ultrasound clinics were enlisted for this study. All participants provided informed consent in accordance with the Declaration of Helsinki guidelines for human subjects. Fetal gestational age of participants ranged from 7.00–10.57 weeks at the time of sample collection. SneakPeek® test results were confirmed through subsequent sonographic evaluation after participants had reached at least 14 weeks gestation. Inclusion criteria were confirmed pregnancy, gestational age at least 7weeks, and agreed to return to ultrasound clinic to confirm gender through sonographic evaluation. Exclusion criteria were a refusal to give informed consent or any miscarriage within the last 3months.

At the time of sample collection, 3–4mL of maternal blood was drawn from all participants by standard venipuncture. Blood samples were sent to the SneakPeek® lab where 600µL of the collected sample was then centrifuged at 1,600 g for 15 minutes to separate plasma from whole blood. Next, 100µL of the separated plasma was incubated with 20µL of Proteinase K to help degrade any proteins that may have been bound to the DNA. Following proteinase K treatment, cfDNA was isolated from the plasma samples using the MagMAX® Cell-Free DNA Isolation Kit (ThermoFisher) according to the manufacturer’s instructions. Real-time quantitative polymerase chain reaction was utilized to detect male cell-free fetal DNA as follows. Isolated cell- free DNA (5ul) was dispensed into 96-well plates and reacted with a custom master mix for a final PCR reaction volume of 25ul per well. Male cell-free DNA was detected using a multi-copy target sequence on the Y-Chromosome. An autosomal control gene was detected to confirm that a sufficient amount of total cfDNA (maternal and fetal) was isolated from the sample. The cycling conditions for the PCR were set at 10 min at 95ºC to allow for the initial denaturation of DNA and polymerase activation, followed by 45cycles of one minute at 60ºC and 15seconds at 95ºC. An algorithm that incorporated the cycle threshold (CT) value of the Y-target sequence and autosomal control gene PCR reactions was utilized to determine fetal sex. The results of the SneakPeek® assay were confirmed through sonographic evaluation at the conclusion of the study.

One hundred and eight pregnant women from five ultrasound clinics participated in this study. At time of collection, the gestational age of all pregnant women ranged from 7.00 to 10.57 weeks with a median of 8.43 weeks and an average of 8.44 weeks (Table 1). Fetal sex was determined for all 108 participants. In this study, there were 51 male bearing pregnancies and 57 female bearing pregnancies. SneakPeek® correctly identified all 51 male bearing pregnancies, demonstrating 100% sensitivity for Y-chromosome DNA detection. There were 0 false negatives resulting in a positive predictive value of 100%. SneakPeek® correctly identified 56 of 57 female bearing pregnancies. There was one false positive resulting in a negative predictive value of 98%. Four of the 108 samples initially yielded an inconclusive result. A second sample was collected from the four participants and a result was obtained on the second round of testing (Table 2).

Table 1 Gestational age of the 108 participants

Table 2 Statistical parameters of the study 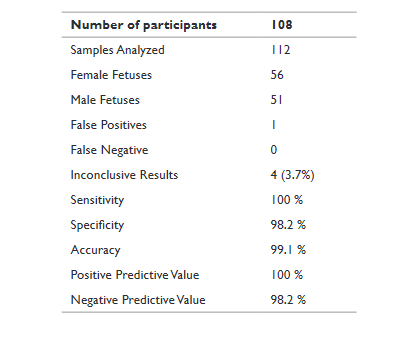 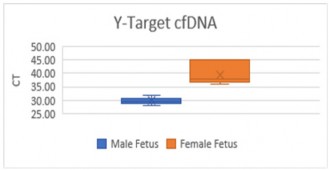 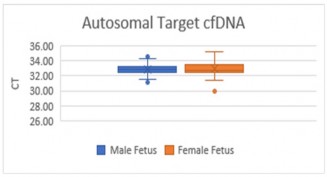 All gender results were confirmed by a licensed sonographer via ultrasound. There was one false positive and no false negatives. The false positive detection of the Y-Chromosome target sequence could be due to a number of reasons. One reason is that the blood sample could have been contaminated. Another reason could be due to fetal DNA from a previous male pregnancy still lingering in the maternal cfDNA. Most likely, reason is due to a vanishing twin, where the XY chromosome detected could be assumed from the disappearing twin.11 The lack of any false negative results in this study suggests that there is sufficient cell-free fetal DNA present in maternal circulation as early as eight weeks gestation for fetal sex determination.

Although there are ethical concerns that should be considered when using non-invasive fetal diagnosis for fetal sex determination, a large number of benefits have been reported.12,13 For example, knowledge of fetal gender in early pregnancy is clinically indicated if sex-linked genetic disorders are present. Further, Lewis et al. reported significant benefits of early sex determination for expectant mothers including several psychological advantages (perceived control, early- reengagement, normalization of pregnancy and peace of mind). Additional studies should be conducted to determine whether non- invasive prenatal diagnosis can be performed at earlier timepoints in pregnancy. 14

The author declares there are no conflicts of interest.