Early fetal sex determination has become more prevalent among parents interested in planning for their unborn child. Current advances in non-invasive prenatal testing (NIPT) have facilitated this desire with safe and efficient methods such as the SneakPeek® Early Gender DNA Test (“SneakPeek”). Here, we report the accuracy of SneakPeek® from a large-scale clinical study of 1,029 pregnant women between 7 and 37 weeks of gestation (median =10 weeks). A follow-up survey was conducted on all study participants to determine whether the birth sex of their child matched the fetal sex test result reported by SneakPeek®. Venipuncture blood samples were collected from pregnant women in October through December of 2019, and subsequently analyzed with SneakPeek® to determine fetal sex. After birth, a survey was conducted to obtain live birth information for all participants in the study. Y-chromosome DNA was detected in 505 of the 506 samples from mothers that gave birth to baby boys, providing 99.8% sensitivity. Gender of all 523 newborn girls was identified correctly, resulting in 100% specificity. There were no cases of male DNA contamination identified in this study (i.e. no false positives). In the largest qPCR-based fetal sex test study to date, SneakPeek® test results were confirmed using the gold standard of the baby’s sex at birth. With 99.9% accuracy, SneakPeek® is the most reliable early fetal sex text available for expectant parents.

The biotech industry has been responsible for many technological advancements within molecular-based prenatal tests and validating information obtained from these advanced techniques is essential to demonstrate the accuracy of these new tests. A plethora of non-invasive prenatal tests (NIPT) have been developed, however there are only a handful of clinical studies that are robust enough to show real-world accuracy, with most studies reporting on fewer than 1,000 total patient samples.1–6 Credible and accurate inputs are crucial to the quality of the data output which plays a large role in the success of a given genetic test. In this study, we sought to show that the SneakPeek®Early Gender DNA Test (“SneakPeek”). can offer high confidence in its test results by leveraging the highest quality data validation to confirm their high accuracy claims – live birth confirmation.

In a prior study with fewer samples, SneakPeek® was shown to determine fetal sex at 8 weeks gestation with 99.1% accuracy.7 In this large-scale follow up study, live birth data from more than 1,000 study participants demonstrated that SneakPeek® is 99.9% accurate for fetal sex identification. Accessibility to high-quality genetic testing for prospective parents to learn the sex of their fetus has been substantially improved due to the affordability and reliability of SneakPeek®compared to other methods for predicting fetal sex such as ultrasound anatomy scans, chorionic villus sampling, and amniocentesis.8–13

With high consumer expectations and increased access to information, parents want to learn the sex of their fetus earlier in pregnancy.5,10,14,15 With a small blood sample, parents can learn gender sooner, more reliably, and less expensively than ultrasound anatomy scans or other non-invasive prenatal tests.6,12,16–19 Compared to other methods available to parents, SneakPeek® is the most accessible, affordable, and accurate choice for fetal sex determination.7 Demand to learn the fetus’ sex prior to childbirth has increased. Several studies have shown that over 50% of women and their partners wish to know the sex of their child before birth.9,10 Expecting parents’ motivation for learning their fetus’ sex originates from not only medical concerns but also nonmedical and social reasons. These reasons include childbearing preparations, the desire for a closer emotional attachment to the fetus and bestowing a sense of personhood and social identity upon the fetus instead of using gender neutral pronouns such as “it”. Furthermore, fetal sex determination has been shown to confer benefits to both the parents and to the unborn child as prenatal knowledge of the fetus’s sex is correlated to prenatal care seeking behavior.9,10,16, 4,20 During the COVID19 pandemic, many elective ultrasound locations were closed, health practitioner visits moved to a telehealth setting, and many pregnant women did not feel comfortable visiting a clinic. SneakPeek was an excellent option for all pregnant women to safely learn fetal sex from the comfort of their home. It has also been reported that early fetal sex determination helps women and their partner bond with the baby.10 The earlier the parents can find out the sex of the baby, the earlier the mother and partner can experience this benefit.

As the leading provider of early gender DNA tests, SneakPeek®conducted the largest clinical study to date to validate the accuracy of the SneakPeek® product based on live birth confirmation. The study included 1,029 women between 7- and 37-weeks’ gestation (median 10 weeks) who took the SneakPeek®’s Early Gender DNA Test between October and December 2019. Each participant was asked to confirm the birth sex of their newborn child and the result was compared to the SneakPeek® result provided during pregnancy. The results indicated that SneakPeek® was 99.9% accurate at correctly identifying fetal sex. A discordant sex result was reported by 1 of the 1,029 participants.

Gateway Genomics conducted a large-scale follow-up survey in October 2020 to evaluate the accuracy of SneakPeek® for determining fetal sex based on live-birth sex confirmations. Venipuncture blood samples were collected from women who were 7-37 weeks gestational age between October and December 2019. Study inclusion criteria were postpartum mothers who had received a SneakPeek® fetal sex test result and successfully given birth. At the time study participants were surveyed, their babies were between 3 and 7 months old. Study participants were asked to confirm that the baby’s sex at birth matched the result given to them by SneakPeek®.

During sample collection, 2-3mL of maternal blood was drawn from all participants by standard venipuncture. SneakPeek® Labs centrifuged the blood sample to separate plasma from the whole blood. Cell-free DNA (cfDNA) was isolated from the plasma samples. Real-time quantitative polymerase chain reaction (q-PCR) was used to detect the presence or absence of Y-chromosome DNA. To confirm that enough maternal and fetal cfDNA was isolated in the sample, an autosomal control gene was detected. Fetal sex was determined by using an algorithm that incorporated the cycle threshold (CT) value of the Y-target sequence and autosomal control gene through PCR reactions. The results of the SneakPeek® assay were confirmed through live birth confirmations.

One thousand and twenty-nine participants met inclusion criteria and confirmed whether their SneakPeek® result matched their child’s birth sex. At the time of sample collection, the gestational age of the pregnant women ranged from 7.00 to 36.43 weeks. The average was 10.45 weeks, the median was 10.00 weeks (Table 1). Of the 1,029 samples included in this study, 1,028 SneakPeek® results matched the baby’s gender at birth for an overall accuracy of 99.9%. In this study, there were 506 live male births and 523 live female births. SneakPeek®correctly identified 523 of the 523 female births, demonstrating 100% specificity. SneakPeek® correctly identified 505 of the 506 male births, demonstrating a 99.8% sensitivity for Y-chromosome DNA detection. There were no false positives, resulting in a 100% positive predictive value. There was 1 false negative resulting in a 99.8% negative predictive value (Table 2).

Table 1 Gestational age of the 1029 participants

Table 2 Statistical parameters of the study 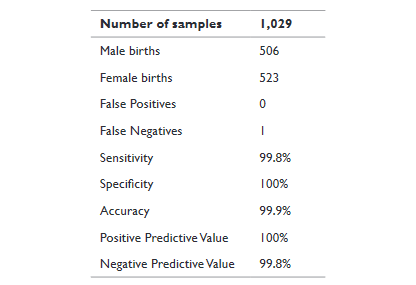 In previous studies with smaller sample sizes, SneakPeek® Early Gender Test was demonstrated to be 99.6% and 99.1% accurate for determining fetal sex as early as 9- and 8-weeks gestation, respectively.7,21 In this large-scale follow-up study, SneakPeek®showed greater accuracy for determining fetal sex than was previously reported. By using live birth as confirmation for the gender test result, SneakPeek® has demonstrated 99.9% accuracy for fetal sex determination as early as 8 weeks gestation. To our knowledge, this is the largest follow-up study to date of a PCR-based fetal sex test. The failure to identify the male Y-chromosome DNA in one of the samples is most likely due to low cell-free fetal DNA concentration in maternal blood (or low fetal fraction). Other groups have suggested that the fetal fraction must be greater than 3-4% in order to provide a low false negative rate.22 Several factors including body mass index (BMI) can affect the fetal fraction as women with higher BMI have a lower fetal fraction.23 With an increase in the concentration of cell-free maternal DNA and a decrease in the concentration of cff DNA, the fetal fraction is lower.24 If there isn’t enough fetal DNA present in a sample, the Y chromosome target DNA may not be detected by a qPCR assay.

SneakPeek® utilizes a Y-chromosome target sequence to detect male fetal DNA in maternal plasma. An autosomal control gene is used to confirm that a sufficient amount of cfDNA was isolated from the plasma sample. SneakPeek® determines fetal sex by using an algorithm that combines the CT values from the PCR for both the Y-target sequence and autosomal control gene. SneakPeek® results were confirmed by live birth of the babies born from the participants included in this study. Other methods of confirming gender results, such as ultrasound and next generation sequencing, are not as accurate as live birth. Only ultrasound predictions made after 14 weeks gestation are highly accurate. The accuracy rate for 11-14 weeks gestation has been reported to be only 75% accurate.25 Our study shows that SneakPeek® is 99.9% as early as 8 weeks gestation based on live-birth confirmation, which is almost two months earlier than ultrasound scans can reliably predict fetal sex.

Prior to recent advances in molecular testing for gender determination, the ultrasound was the traditional method pregnant women used to determine the gender of their fetus. However, ultrasound anatomy scans are not usually performed until 18-22 weeks gestation since the purpose of these anatomy scans are to identify developmental abnormalities and not merely to determine fetal sex.18,26 Today, early gender testing methods are available to moms around the world via capillary and/or venipuncture blood samples. In this study, venipuncture blood samples were collected between October and December 2019. Fetal gender was determined using a qPCR based SneakPeek®. As the gold standard of sex determination, live births were used to validate the test results provided by SneakPeek® during pregnancy. SneakPeek®’s previous clinical studies demonstrated 99.1% accuracy; however, a smaller set of samples were utilized in that study and sex at birth was not confirmed. In this study, the accuracy of SneakPeek® was determined using live births as the confirmation method, which is the only 100% accurate measure of the baby’s sex. Of the 1,029 tests, 1,028 test results matched the baby’s sex at birth resulting in a 99.9% accuracy for SneakPeek®. Y-chromosome DNA was detected in 505 of the 506 samples from mothers that gave birth to baby boys, resulting in 99.8% sensitivity. All of the 523 newborn baby girls were identified correctly resulting in 100% specificity.

Between October through December 2019, venipuncture blood samples were collected from 1,029 women who were between 7-37 weeks into pregnancy, with the median gestational age of 10 weeks. The SneakPeek® Early Gender DNA test was used to determine fetal sex. A follow-up survey was completed by all participants after their babies were born to learn if the birth sex matched their SneakPeek®result. SneakPeek® was shown to be 99.9% accurate at identifying fetal sex based on live-birth confirmations. To our knowledge, SneakPeek® is the most accurate blood test available for determining fetal sex as early as 8 weeks into pregnancy.

SneakPeek® is a registered trademark of Gateway Genomics, LLC.

Milot and Jacob conceived and designed the study. Milot, de Jerez and Jacob participated in the data collection and analysis and drafted the manuscript.

Milot and de Jerez have received payments from Gateway Genomics regarding their role as laboratory scientists for this study. Jacob has shareholdings in Gateway Genomics.