Background: SneakPeek® Early Gender Test (Gateway Genomics) is a qPCR-based assay that utilizes a microvolume of maternal plasma to determine the fetal sex as early as 9 weeks gestation. In this study, we aimed to evaluate the accuracy of SneakPeek Early Gender Test for fetal sex determination in self-collected maternal blood samples.

Methods: Maternal capillary blood samples were self-collected by 18 pregnant women between 10.86 and 36.86 weeks of gestation. Venipuncture samples were collected from another set of pregnant women to allow for comparison of test results with those obtained from self-collected capillary samples. A micro volume of maternal plasma from each of the blood samples was obtained through centrifugation. Then, the circulating cell-free DNA was further isolated from the plasma via a commercial DNA extraction kit (NucleoSpin® Plasma XS, Macherey-Nagel). Real-time quantitative PCR was next performed to amplify and measure the presence of the targeted Y-chromosome specific multi-copy sequence and autosomal control gene (used to measure the total cell-free DNA) in each sample.

The presence of cell-free fetal DNA (cffDNA) within maternal plasma obtained by venous blood draw was first discovered by Dennis Lo in 1997 [1]. He found that cffDNA derived from trophoblasts in the placenta and could be detected in the maternal circulation as early as 5-7 weeks gestation [2]. Following his discovery, Lo et al. proposed the possibility of using the cffDNA for non-invasive prenatal diagnosis [1].

In the two decades that have passed since Lo’s discovery, medical technology has yet to surpass the need for venous blood sampling for the detection and analysis of cffDNA. In fact, sonography is still the most common method of fetal sex determination. While highly accurate, this method is limited to a minimum gestational age of 12-13 weeks and must be performed by a licensed sonographer [3]. Moreover, although the use of NIPTs has increased in recent years, current practices, which require venous blood sampling by a licensed phlebotomist, can limit accessibility to expectant mothers.

Previous studies have exemplified the ability to determine fetal sex from fetal DNA found in the maternal plasma by testing for the presence of several Y-chromosome specific sequences of varying specificity and sensitivity [4]. Studies that used a single copy gene, like the sex-determining (SRY), showed a high specificity for fetal sex, however, still required a large amount of maternal blood (10 mL) [5]. In contrast, studies that used multicopy target sequences on the Y-chromosome provided greater sensitivity and allowed for accurate results with micro-volume amounts (100 μL) of maternal blood [6,7].

In this study we propose a novel, noninvasive test which would allow for the determination of fetal sex via DNA detection from a micro-volume of self-collected maternal blood.

Eighteen pregnant women from one ultrasound clinic, with written informed consent in accordance to Helsinki guidelines for human subjects, were selected for blood collection followed by sonographic examination to confirm fetal sex. The gestational age of all participants at time of collection ranged between 11 and 37 weeks. Each woman participating received written instructions on how to collect capillary blood using a lancet. Self-sampling was performed at the clinic, which yielded approximately 500 μL of maternal capillary blood from each participant. Venipuncture samples (3-4 mL) were collected from another set of pregnant women (n=18) to allow for comparison of test results with those obtained from capillary samples. For all samples, plasma was separated from whole blood by centrifugation at 1,600 g for 15 min. The cfDNA was then further isolated from a micro-volume (100 μL) of the maternal plasma using the NucleoSpin® Plasma XS kit (Macherey-Nagel) according to the manufacturers’ instructions.

Next, the extracted cfDNA was subjected to real-time quantitative PCR to detect a multi-copy target sequence specific to the Y chromosome and an autosomal control gene. The PCR was performed with the following cycle conditions: 10 min at 95ºC for initial denaturation of the DNA and polymerase activation, followed by 45 cycles of 1 min at 60ºC and 15 s at 95ºC.

The data obtained from the PCR was then interpreted as a male or female fetus through the use of an algorithm that incorporated the Cycle Threshold (CT) value of both the Y target sequence and autosomal control gene. Additionally, the levels of cfDNA were compared between maternal capillary samples and venous samples. Performance characteristics of the SneakPeek assay for fetal sex were determined for self-collected capillary blood samples and phlebotomist-collected venous blood samples (e.g., accuracy, sensitivity and specificity). Finally, the results of the SneakPeek assay were confirmed by concurrence with ultrasound scans performed by a licensed sonographer.

Table 1: Gestational age of the 18 participants.

The statistical parameters of the study are described in Table 2. The SneakPeek assay resulted in predictions of fetal sex for all 18 participants. Gestational age did not differ significantly between male and female pregnancies. Of the 18 self-collecting participants, SneakPeek correctly identified 7 as male bearing pregnancies and 11 as female bearing pregnancies. There were no false positives and no false negatives in any of the samples tested in this study. The positive predictive value was 100% for SneakPeek. The SneakPeek test had an accuracy of 100% for fetal sex determination for both self-collected and phlebotomist-collected groups. 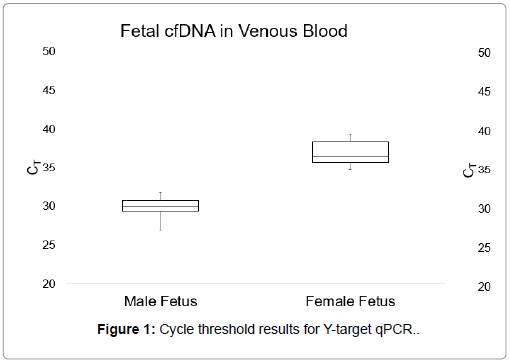 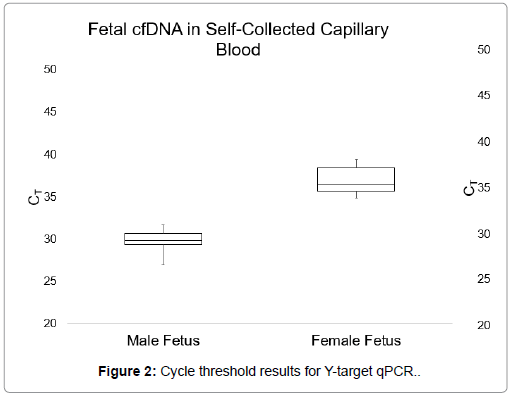 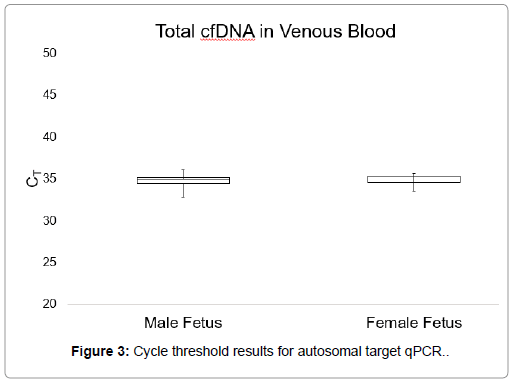 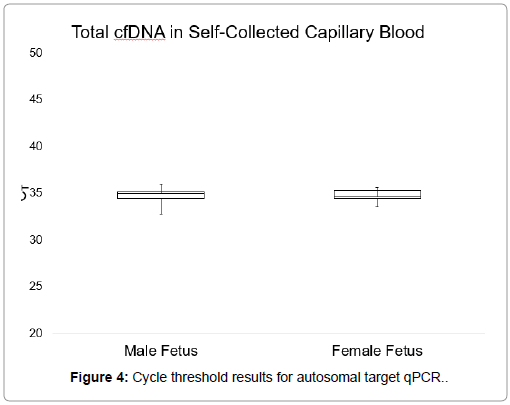 In this study, we tested the accuracy of the SneakPeek Early Gender Test for fetal sex. The 100% accuracy achieved in this study demonstrates the ease and efficiency of the noninvasive self-collection method via finger stick. DNA extracted from the maternal plasma was tested to measure the presence of male fetal DNA and total cellfree DNA by targeting a multicopy Y-chromosome sequence and an autosomal control gene, respectively. From the data obtained, we were able to accurately determine fetal sex as early as 9 weeks gestation.

There were no significant differences between the average CT values obtained from qPCR for the Y-chromosome target sequence in plasma samples from venous blood and self-collected capillary blood, as calculated by an unpaired Student’s t test (p=0.05). Furthermore, there were no observable differences in total cfDNA levels between the two sample collection types. These results demonstrated that cell-free DNA is similarly present in both venous and capillary blood.

All gender results from the SneakPeek Early Gender Test were subsequently confirmed via ultrasound by a licensed sonographer. No false-positive and no false-negative results were observed in this study (Table 2).

To our knowledge, this is the first study to compare venipuncture blood to self-collected capillary blood for fetal sex determination during the first trimester of pregnancy. Unlike current NIPTs, which require a 3-4 mL of venous blood, the SneakPeek Early Gender Test can determine fetal sex from a fraction of the volume needed for traditional testing. The minimum volume of 200 ul of whole blood needed for SneakPeek would be sufficient to yield 100 ul of plasma and is approximately 1/50th of the amount of whole blood required for current NIPTs.

The authors acknowledge the limited nature of the study due to the small sample size. However, the SneakPeek Early Gender Test has been shown previously to be greater than 99% accurate for fetal sex determination [8]. The results of this study on self-collected samples are in line with those findings. Additional studies with a greater number of self-collected samples will be performed. Another limitation to this study is the lack of diversity in the sample population. The study only included singleton pregnancy participants and thus the effects of twins on the accuracy of the assay were not tested. Future studies should include twin pregnancies in the sample population. Finally, our study did not investigate the effects of the expectant mother’s weight (or body mass index) on the accuracy of the test. According to Ashoor et al., the fraction of fetal DNA present in the maternal circulation decreases as the expectant mother’s weight increases [9]. This could potentially result in a false negative result for our assay, if the fetal fraction within the maternal plasma was too low to detect the presence of the Y chromosome. The limit of detection for our assay will be further evaluated in future studies.

Despite the bioethical concerns of early fetal sex determination that have been raised by some groups, in regards to the potential use of NIPTs for eugenics, numerous benefits for this noninvasive prenatal testing technology have been described. For example, Hyett, et al. reported that non-invasive determination of fetal sex in early pregnancy resulted in a reduction in diagnostic and therapeutic interventions [10]. By determining fetal sex early in pregnancy, there is increased potential for identifying gender-related genetic disorders. In addition, Lewis et al described several psychological advantages (perceived control, earlyre- engagement, pregnancy normalization and peace of mind) found in expectant mothers that were told the sex of their fetus early on in pregnancy [11].

Furthermore, this study demonstrates the feasibility and reproducibility of self-collected maternal blood for genetic testing and establishes a potential for future noninvasive prenatal testing. By utilizing this self-collection method of blood sampling, future studies can be performed to investigate the feasibility of large population screening using this technique. In addition, the self-collection method could increase sample collection efficiency, especially in areas where access to phlebotomy services are limited [9]. Future studies should further evaluate the potential of self-collected maternal capillary blood for other prenatal diagnostic applications.

Copyright: © 2019 Abunadi N, et al. This is an open-access article distributed under the terms of the Creative Commons Attribution License, which permits unrestricted use, distribution, and reproduction in any medium, provided the original author and source are credited.